Argentine singer and musician, Diego Verdaguer, died on Friday (Jan. 28) at a hospital in Los Angeles due to COVID-19 complications. He was 70 years old.

“It’s with absolute sadness that we inform all of his fans and friends that our beloved Diego left his body today to continue his journey and creativity in another form of eternal life,” read an official statement by Verdaguer Miguel family on Instagram. “His entire family is submerged in this pain, which is why we ask for your comprehension in these difficult times.” 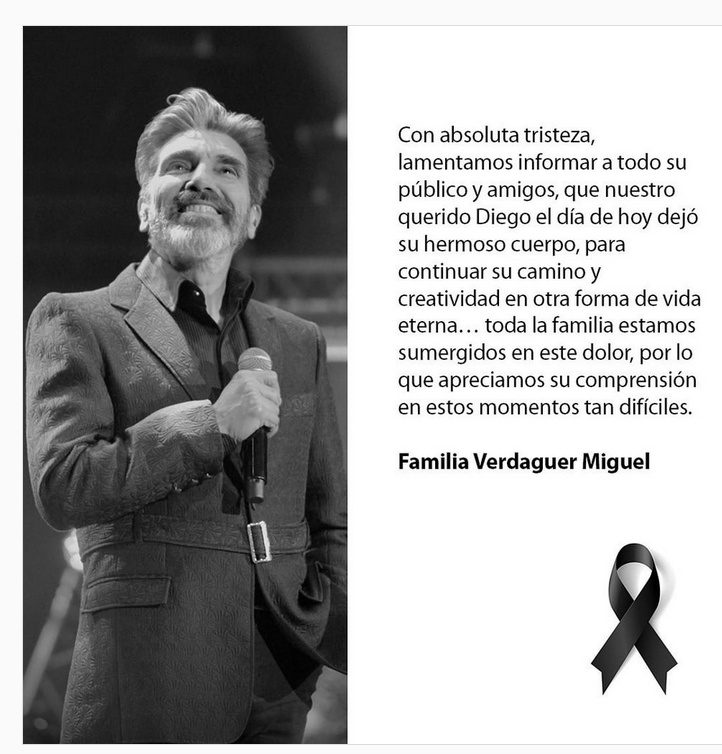 A wave of artists and fans, including Yuri, Lucero, Danny Felix, and many more, expressed their condolences on social media.

Verdaguer was known for such timeless hits as “Volvere,” “Corazón de Papel,” “Tonta,” “Ladrona,” and “Voy a Conquistarte.” On the Billboard Hot Latin Songs chart, he placed “Estoy Celoso” and “No Es Tan Facil.”

A versatile artist, who easily navigated from romantic ballads to cumbia gems to ranchera music, Verdaguer’s Mexicano Hasta Las Pampas album — produced by the late Joan Sebastian and released after a 10-year hiatus on his own label (in partnership with Sebastian) — received a Latin Grammy nomination in 2009. Its sequel album, Mexicano Hasta Las Pampas 2, also received best ranchero album nomination in 2015.

The multiple Latin Grammy nominee was married to fellow Argentine powerhouse singer Amanda Miguel. The couple met in the early ’70s when Amanda joined his group, Mediterráneo. She then launched her solo career with help from Diego and became a household name in the ‘80s with her songs “El Mintio” and “Así No Te Amará Jamás.”

In 2018, Verdaguer and Miguel kicked off their “Siempre Juntos” joint tour, where they visited more than 25 key cities in the U.S. They were joined by their daughter, Ana Victoria, on 10 dates. Last year, the couple celebrated Verdaguer’s 70th birthday on Facebook Live, with the April 17-upload reaching No. 1 on Billboard’s Top Facebook Live Videos chart, powered by Shareablee.

Earlier this month, Verdaguer posted a heartfelt and reflective video where he said: “Today, I want to start the day by thanking life for allowing me to enjoy each of its wonders. I want to send a speech of positive energy to all the people who are going through a difficult situation.”